H.H. Pope Tawadros II on the June 30 Revolution: “What Has Been Accomplished over the past Eight Years Is a Great Achievement.”

“What has been accomplished over the past eight years since the June 30 Revolution is a renaissance and achievement,” as said by H.H. Pope Tawadros II, who also noted that goal of the Revolution was the restoration of the nation through the removal of those who were to rob its history and present. This came during a telephone interview this Wednesday evening, which H.H. the Pope had with the TV program “Yahdoth Fi Masr” (Happening in Egypt), as presented by anchor Sherif Amer on MBC Misr Channel. At the beginning of the program, in introducing H.H.; Sherif Amer described H.H. the Pope as possessing one of the most powerful voices within the framework that shaped the June 30 Revolution, and that H.H. the Pope will be recalling those moments.

The Following Were the Questions H.H. the Pope Was Asked by the Program’s Host:

Q: What is on the mind of the Pope on this occasion? Do you return to the memories of the June 30 Revolution, and what messages do you deliver to the people?

H.H.: Of course, we relive those memories, but certainly we also live in the renaissance and in the achievements that are the fruits of the Revolution, whose sole and clear goal was the restoration of our country, and now we are living in the reality of the founding of the new republic, as His Excellency the President calls it.

Q: How would you describe what is happening in the new state or new republic?

H.H.: What is happening now is not limited to one single area, but rather covers the whole of Egypt…in the areas of health, industry, economy, and others; all those areas are developing together, and this is considered a great accomplishment.

Q: Were the goals of the Revolution for which the people went out on June 30 achieved?

H.H.: It is always the case that the changes which occur in people’s lives take time before coming to full fruition. What took place over the past eight years is called a great achievement because it occurred over a short period, and particularly in the face of overarching challenges from the East and the West, and the North and the South, for the matter was not merely restricted to internal challenges, but we thank God for His blessing; He gave the officials and all the faithful of the land of Egypt: Wisdom, and for us to move forward in this way. I expect that in the next few years Egypt will be the topic of conversation internationally for what has been accomplished in it.

Q: Does the issue of the Renaissance Dam concern the Pope as it does the Egyptian people?

H.H.: Absolutely, the subject relates to the Nile, the waters. We thank God that the President and ministers concerned, the Minister of Foreign Affairs as well as the Minister of Irrigation, who have pursued the course of patient politics on every level in this case, and I am confident that this policy will pay off. Despite the gravity of the issue, I am confident that it will be resolved in one way or another, to the satisfaction of all people. May God preserve Egypt which He loved by the Nile, and may He bless its people, water, and land.

Q: What moments are left in your mind from the revolution?

H.H.: These moments constitute a milestone in the history of the nations, although moments spent in the disposal of those who robbed the country, its history and present. However, one of the most beautiful things about those moments is the participation of all: men and women, old and young. Also, the beautiful image of their carrying the flag, and the feeling felt by all as they chanted for their emergence from the darkness that had overtaken, but God looked at the hearts of the Egyptians and gave them this blessing, breakthrough, and new beginning, for the success of Egypt and its progress.
The Coptic Church congratulates the President and the Egyptian people on the 8th Anniversary of the June 30 Revolution, expressing its conviction of what the President and the State governing bodies are doing is occurring within the context of improving the life of the citizen, and the provision of human dignity as well as a decent life for all its people – all consistent with what the people advocated for during the June 30 Revolution.

The Coptic Orthodox Church launches the “Daughter of the King”... 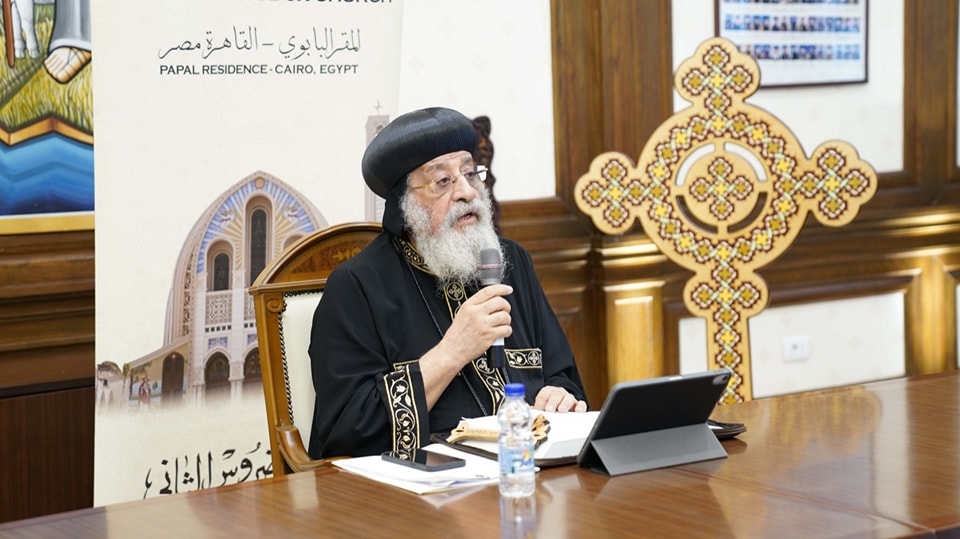