During the papacy of H.H. Pope Shenouda III, Father Salib Sorial the monk was assigned the role of starting a service in Germany in 1975. He was accompanied by the late Bishop Samuel, the bishop of general services. The monastery’s land was purchased in 1980.

Hegumen Mikhail El-Baramosy (who is currently Bishop Mishael and the monastery’s abbot) then established the monastery and he was assigned this by the Mother Church on the 31st of March 1980.

This monastery is considered not only the first Coptic monastery in Germany but all of Europe. At the beginning, there was no church in the monastery. The liturgical prayers were prayed in a room in the second level of the building. The first Liturgy was prayed in this room on the 7th of April 1980. The place of prayer was then moved to another room until the new church building was complete.

The monastery was opened on the 25th of May 1980, and the foundation stone of the new church was laid on the 9th of March 1988. In November 1990, it was consecrated by the late H.H. Pope Shenouda III and ten bishops.

The new building which contains the church, rooms for the monks and lecture halls for the theological college was built between 1999 and 2001. After one year, the Institute of Coptic Theology became active (the course length was four years).
A school was bought in 2008 and after one year, the halls of the Theological Institute were moved to it. A theological college was also established in it, to become a beacon of Orthodoxy in Germany.

In its meeting to celebrate the Feast of Pentecost in 2010, under the leadership of the late H.H. Pope Shenouda III, the Holy Synod officially recognized Saint Anthony’s Monastery in Kröffelbach, Germany. H.H. Pope Shenouda III ordained three monks for our monastery in Kröffelbach, Germany and also changed the monastic form of Hegumen Mikhail (the monastery’s secretary) and the monk Ghobrial. 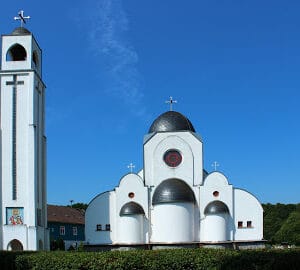