The monastery’s foundation was laid on the 27th of November 1959. This was beneath the main altar of the main church. It can be seen behind the glass facade facing the tomb of Pope Kyrillos. On it is a marble plaque with an inscription of the date of the laying of the foundation.

1) The First Buildings
In the beginning, a small church named after Saint Samuel the Confessor was established, containing the relics of Saint Mina, a room for Pope Kyrillos and a room for making the Orban. H.H. Pope Kyrillos and those who accompanied him would spend days and sometimes even months in these two rooms. Conditions were tough as there were no security or rest but they done so to monitor the work’s progress.

2) The Church of the Virgin Saint Mary
Later, this church was built inside the monastery for worshipers. It has three altars and usually, three Liturgies are prayed in it. It was opened for prayer in November 1961.

3) The Church of Archangel Michael

5) The Shrine of H.H. Pope Kyrillos the Sixth
It is located in the East of the cathedral, underneath the altars. It contains the body of His Holiness which was initially laid in a dedicated grave for the patriarchs beneath the Cathedral of Saint Mark (Al-Morkoseya) in Cairo following his departure. His body was then moved to the monastery on the 24th of November 1972 with a great celebration, according to his will.

6) The Church of Saint Mark the Apostle
It was built as an extension of the cathedral from the eastern side, in order to be one unit with the shrine of Pope Kyrillos the Sixth. The iconistasis of this church and the crowns of the pillars are wooden, like those discovered in the historical site of the monastery of Saint Jeremiah in Sakarra.

7) The Church of Saint Julius of Aqfahs (El-Akfehasi)
This church is named after Saint Julius of Aqfahs (El-Akfehasi); the writer of the biographies of the saints. It is located in the southern corner of the monastery’s boundaries and beside the grave of the fathers. The first Liturgy was prayed in it on the 2nd of October 1990 (Tuesday the 22nd of Tout) which is the Feast of Martyrdom of this saint. 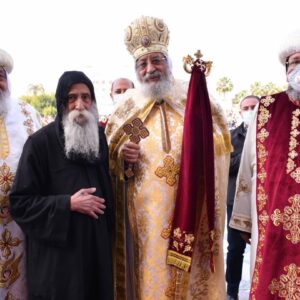 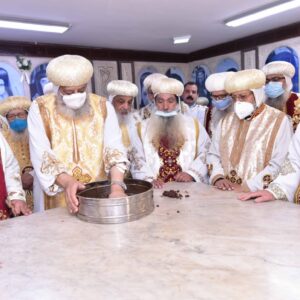 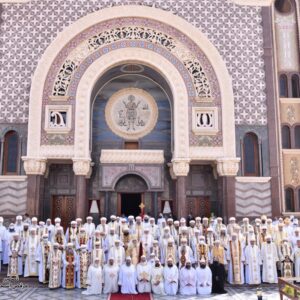 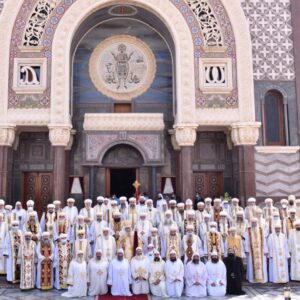 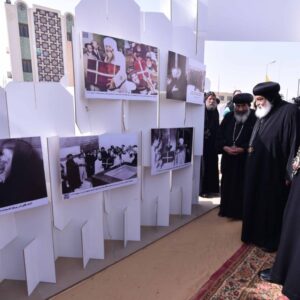